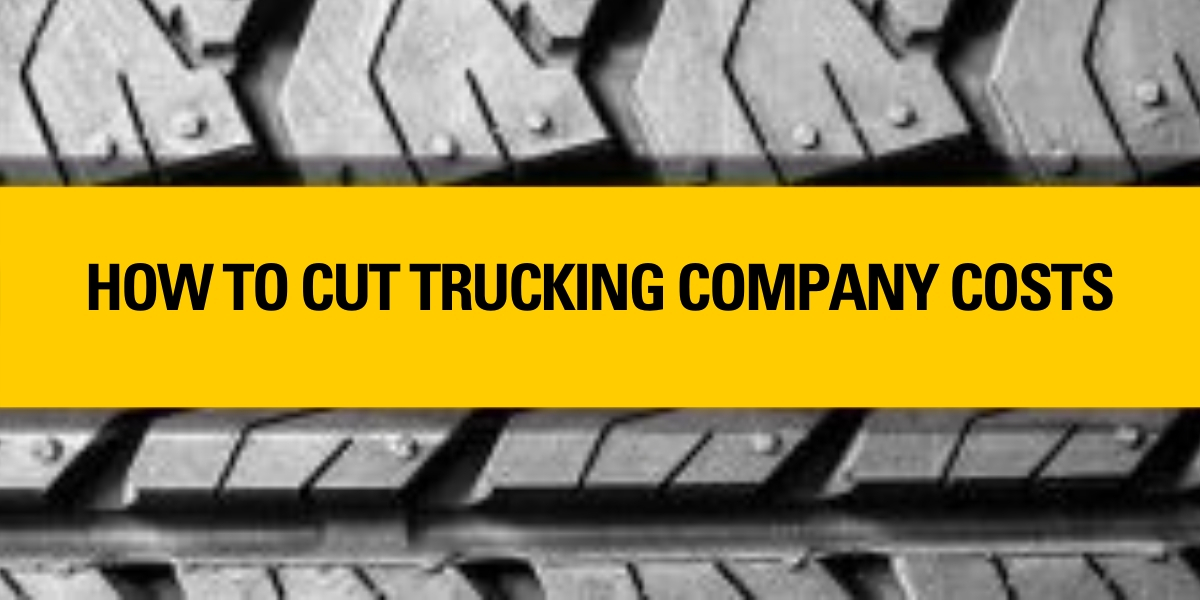 How To Reduce Trucking Costs

To run a profitable trucking company, it is crucial to cut truck fleet costs as much as possible, yet still fulfill deliveries with utmost efficiency. The fact is, controlling operational costs of truck fleets involves a range of steps at various levels of staff. For instance, if you are wondering how to reduce trucking costs at the managerial level, first take a look at the areas in which your company spends most heavily. Chances are, there are areas where you can cut extraneous costs from the equation.

For more ideas on how to lower your trucking company costs, consider the following 10 courses of action.

When you run a trucking company, one of the biggest mistakes you can make is failing to track your budget promptly. Typically, a company will hire an accountant to do a profit/loss statement at the close of each fiscal year, and then examine the trend.

Your company’s expenses may change weekly, often as a result of decisions you make over the course of several days’ worth of deliveries. Therefore, effective tracking means watching what you spend every week, and thoroughly examining your budget at the close of each month.

In cases where a company’s profit margins are subpar, the typical response is to shoot for higher earnings as a means to recoup the loss. However, it is actually easier to boost a profit margin by cutting expenses. As such, it is crucial to track your week-to-week and month-to-month expenses, and trim your overhead spending according to the needs of your operations.

Take inventory of extraneous items on your list of monthly expenses. If there’s anything you’re not using — especially if it’s eating into your overhead costs — cut those items or services from your budget. If you can reduce your costs by $100 or more per week, it will significantly boost your annual profit margin.

A common weakness in the trucking industry is the lack of managerial expertise among dispatchers. In an industry this large and consequential, each driver-manager who heads a fleet of 40 or so drivers is virtually functioning as the head of a multi-million-dollar business. Since a great many dispatchers get promoted into that role after serving time as drivers, some of the more complex concerns of management are foreign to driver-managers.

For example, driving companies often lose money when dispatchers set the goal at a total mileage, rather than billable mileage. This approach incentivizes the wrong priority, wherein the driver strives for a certain mileage with less consideration for efficiency. In worst-case scenarios, a company will set an arbitrary weekly mileage that extends beyond the distance of a driver’s total deliveries for a given week, and the dispatcher simply deadheads the excess mileage into the driver’s equation.

Companies that have recognized these errors have managed to cut losses and boost profit margins by incentivizing billable efficiency over raw mileage on a weekly basis. These remedies can also be applied to various higher functions on the chain of command. A perfect example is when a company offers a maintenance director 10 percent of whatever amount they can save from an annual budget. If the company ultimately saves $500,000 at the end of the fiscal year, the director earns an extra $50,000.

The smartest companies are those that focus on their strengths and delegate other tasks to better-equipped entities. In the case of a small trucking company, the wisest choice is for management to focus on what they do and know best — such operating fleets, fielding orders and arranging deliveries — and hiring a third party to handle tasks like billing, payroll, insurance and human resources.

One of the best outsourcing options for small trucking companies is to sign up with a professional employer organization (PEO), which will handle the tasks related to employee management and allow the company to focus fully on fleet operations. The PEO, in effect, will serve as the employer of the trucking company’s staff for insurance and taxation purposes.

The third, and perhaps best, option is the combined approach, where the small carrier signs with a PEO for workers’ issues and partners with a larger carrier for auto liability. While these options might seem like a surrender of control to the uninitiated, outsourcing actually gives smaller trucking companies more control over what they do best.

While some carriers can save money by outsourcing certain tasks, other trucking companies can save money by canceling third-party services and multitasking in-house. One area where companies often misspend money is the task of lead generation, which trucking companies often delegate to third parties. However, the cost benefits of outsourced lead generation often fail to add up for the typical carrier.

The best way for a trucking company to harness its in-house strengths is to evaluate the skill sets of each person on staff and delegate multitasking according to skill level. This way, you can accomplish more from within the company and keep the size of management proportional to the fleet.

If none of your current employees have a necessary skill, encourage your staff to expand their horizons by taking online courses. For example, there is no reason a company shouldn’t be able to handle survey-taking and various other administrative-service tasks. The more skills gained among a tight-knit staff, the less money you have to spend on extraneous employees and third-party services.

Smaller carriers will often assume injuries are simply part of the trucking business, but this is a dangerous assumption that can leave a company vulnerable to workers’ comp claims. Therefore, it is critical for all trucking companies, regardless of size, to adopt a zero-tolerance policy toward accidents and injuries, wherein they leave no stone unturned in the effort to maximize safety along all stages of operation.

According to the U.S. Department of Transportation, 2012 witnessed 333,000 road disasters and 4,000 fatalities involving trucks. Accidents on the road typically occur during long routes on winding terrain and in hostile weather. To lower these risks, it is crucial for driver-managers to train drivers in inclement weather driving. Your company can accomplish this by holding seminars that teach skills on driver safety, accident reporting, vehicle inspection and injury prevention.

One of the more unfortunate realities of the trucking lifestyle is that healthy food is often hard to come by during long routes along rural highways. Consequently, a lot of drivers develop poor eating habits, which results in malnutrition and its various ill effects, such as fatigue, irritability and mood swings.

The lack of energy that often results from poor eating can result in driver burnout, which increases the risk of roadside accidents. For the sake of driver health, mental/physical well-being and safety, it is crucial to encourage a balanced diet and proper rest among drivers.

To stay encouraged while on the move, drivers can load health-motivational apps onto their mobile devices. Apps can also help drivers find healthy food resources along long routes. In any case, fleets are more efficient, and thereby more profitable, when drivers are energetic and healthy.

Aside from the depreciation of diesel engine trucks, fuel is the largest expense trucking companies incur annually. While the price of fuel cannot be controlled, drivers can do their part to conserve fuel by practicing good driving. Likewise, fleet managers can boost fuel efficiency by performing regular inspections and timely maintenance of all vehicles in a fleet.

Even though you can — and should — take steps to improve fuel conservation, the list of answers to spiraling fuel costs does not include cheaper fuel. On the contrary — cheaper fuel can save you money in the short term, but lead to a heap of additional costs in the long run.

For starters, cheap fuel lacks refining additives. As such, cheap fuel will often send deposits through the combustion chamber, injectors and valves of a truck. The deposits and other imperfections can lead to premature parts failure and an overall reduced engine performance.

The repair costs for ailing trucks can be a drain on a trucking company’s profit margin, yet you can greatly reduce these very expenses with better fuel choices. With high-quality fuel, you can get better mileage, cleaner engines and a more robust performance from the vehicles in your fleet.

One of the more wasteful, yet often overlooked, habits of drivers is idling, which consumes fuel and engine power despite the fact that the vehicle isn’t even moving. When you consider the extent to which idling costs can add up, even for drivers of compact cars, the problem is serious when you take commercial trucks into consideration. Simply put, idling hastens the consumption of fuel and puts added wear on engines, both of which can eat into a trucking company’s profit margins.

Granted, there are times idling is impossible to avoid, such as when a truck is stuck in traffic or stopped at an intersection. Otherwise, there is no reason for a driver to leave a truck idling, not even when he’s pulled over to make a quick drop-off or to take a momentary roadside break.

In fact, if a vehicle must hold still for more than 10 seconds — whether off the road or in a parking lot — cut the engine. Ten seconds of idling burns more fuel than the process of ignition. Over the course of a year, starting up an engine several times in a given day will cause only minimal wear and fuel consumption, whereas a few minutes of idling per day could lead to far greater costs, especially when several drivers within a fleet have idling habits.

Trucking companies can save significant sums of money by planning out the most efficient routes to each destination. Often, companies dispatch trucks exclusively along main routes to specific delivery locations. In some cases, alternate routes may be shorter and consist of fewer stops, but these routes just aren’t on the radar of fleet managers.

Whenever a commercial trucking fleet finds quicker routes on which to dispatch trucks, the company reaps the following benefits:

Additionally, faster routes are often safer due to less traffic, which reduces the possibility of accidents. The reduction of traffic itself is also better for the engines and fuel efficiency, since there is less idling along the routes in question.

Today, routing efficiency is easier than ever to achieve, thanks to the various routing apps now available. A routing optimizer app will guide each driver along the shortest, most fuel-efficient routes to and from each delivery destination.

Inspect the Tires and Engine Regularly

Routine inspections of the truck tires and engine parts are crucial to the safety and operability of all the trucks that comprise a fleet. These steps will help ensure a more reliable performance from each truck and reduce the frequency of sudden, unforeseen breakdowns. Preventive maintenance can be a huge money saver, as emergency repair costs are typically anywhere from three to nine times that of planned repairs.

When tires are improperly aligned or unevenly inflated, a truck ends up burning more fuel, as the engine works harder to pick up the slack. With regular tire inspections, a truck will have greater fuel efficiency, because you can detect and resolve problems early before they become costly.

Ideally, drivers should give their tires a once-over between each dispatch. For best performance at maximum savings, have tires retreaded on a periodic basis. Retreaded tires can last up to 120,000 additional miles at only a third of the cost of new tires.

Summary on How to Reduce Trucking Costs

Cutting fleet costs is more than just fixating on one area of overspending, because you’re liable to miss several others. You can only hope to significantly lower your trucking company costs if you constantly examine the quality of your trucks and establish the best training methodologies for your drivers. Meanwhile, controlling operational costs of truck fleets requires optimal routing and competent handling of all the tasks associated with billing, insurance and human resources.